The Oldham & District FH Society is a friendly and welcoming Branch of the M&LFHS. Membership of M&LFHS automatically includes membership of all the associated Branches - one or all!

The meetings are held each month (coffee and biscuits on arrival!) when an invited speaker will give the audience an interesting talk on a subject of particular research interest to themselves. Topics are wide-ranging, including both family and local history, or people of famous or even infamous note!  Have a look at our Events/Meetings page for our current programme and our Events/What's New page for more information.

We also send out a monthly, digital newsletter keeping our readers up to date with other meetings or events of interest, in the wider district, together with pictures and short articles. Society members and non-members alike can sign up, on the Newsletter page, to receive a monthly email link, to the latest newsletter. You will also find a link to the page of archived copies, including the current issue.

Here, on the Branch pages of the website, you will find anything and everything that we can find about the history, and lives of the people, in Oldham and our wider local district. It's an on-going project and, on our Research/Local Interest page. you will find an invitation to contribute you own story or research, to share with our internet visitors.

Navigate the Branch website pages and see at a glance where you might find what you are looking for, with this site map, HERE

The Oldham & District Branch came into being in 1996. An Extraordinary General Meeting had been held in December 1995 at which the Anglo-Scottish FHS and the Bolton FHS had been formally established as branches of MLFHS. Oldham followed suit in 1996 and the Oldham & District Branch was established. Chatting to founder members, long-time committee members and reading reports in the archived MLFHS journals, the Manchester Genealogist, it's been possible to chart the Branch's progress through the following years ... Read more

The Oldham & District Branch Committee, at present, is comprised of :

I started being interested in our family when, as a child of about 6 or 7 years old my paternal Great Grandfather would tell me stories about his relatives and how they eventually ended up in Oldham. After he died my interest waned until around the 1990's when, for no particular reason, the stories he told me resurfaced in my head and I decided to look into our family.
Since then I have graduated to doing bits of research for friends and also working as a volunteer for Oldham Library, teaching ancestry classes on a weekly basis. My most arduous task has been researching 12 names on a WW1 Plaque at The Manchester Golf Club with nothing to go on but an initial and a surname. Ten of the men on that plaque have been traced and two remain to be found.
Although I wasn't a member of the Society I used to go along to their meetings in Oldham and eventually decided to become a member a few years ago. In 2019 I was elected Chairman of the Oldham Branch upon the retirement of Rodney Melton.

I started my own Family History shortly before joining the Society around 20 years ago, following my Canadian cousin giving us a copy of her research into my Mother’s ancestors. I have been a member of the Oldham Committee since 2009, serving as a committee member, then Secretary from 2010-2017 and Treasurer since 2017. Since serving on Committee I have helped to run a Family History Help Desk and a series of Beginners Courses in conjunction with Oldham Local Studies. I can usually be found on the desk signing people in at our monthly meetings and have also helped out on our stand at various Family History Fairs in the North of England. My own ancestors have resided in Bolton, Liverpool, Warrington, Staffordshire, Worcestershire, Suffolk and Portsmouth/Portsea prior to turning up Oldham in the mid 1880’s. I have also been on our London Trips for a number of years enabling me to research a Naval ancestor at the National Archives at Kew, amongst other things.

I became a member of MLFHS in 2007.
I'm the Editor of the Oldham & District monthly newsletter and responsible for the Branch pages on the MLFHS website. I also give occasional talks on both family and local history.
I have been a Branch committee member since March 2019
Before 2007 I had little or no interest in my family history, although my husband's aunt had researched theirs back to the early 1700s and there were yearly get-togethers with descendants. It took my daughter's being seriously ill for the best part of a year, to kick start my own interest, probably to take my mind off what was happening to her. But, once hooked, research takes on a life of its own, and we can never really say we've finished! For myself, the times in which the ancestors lived, and their stories, is of equal importance and local history is a vital partner in my research. To this end, I created the Oldham Historical Research Group website, and organise their talks, complementing Family History Research.

My interest in genealogy started about 20 years when I tried to put the meat on the bones of stories that had been told by family members. Some of the tales seemed far fetched so my sister and I set about to find out if they were true or just somebody's vivid imagination. The outcome was that there was an element of truth in most of the tales, however, some were obviously embellished. My ancestors were spread far and wide in the UK and elsewhere and it has been an interesting journey locating them.
My association with Manchester and Lancashire Family History Society started when I returned to live in the North West 5 years ago. I joined the society when I attended an open day in Manchester Central Library, I have a special interest in the Oldham Branch as lots of my ancestors came from Saddleworth and later on Oldham when the town started to expand with the arrival of the cotton industry. Along the way I have become more interested in the social history aspect of genealogy, I have learned a lot but still have so much more to learn.
I joined the Oldham Branch committee 4 years ago, I stepped down for a year due to ill health, however, rejoined the committee last year just before lockdown. I look forward to a time when we can re-start the monthly meetings and meet in person again.

It's been written that there is a novel in all of us, just waiting to be written. Well, I'm not so sure about that! However, I do believe that there is a story in all of us, waiting to be given a 'voice'.  Family history research is all about identifying our ancestors, their names, births, baptisms, marriages and deaths; their own parents and siblings ... and so the research goes on, reaching further back in time, until that inevitable brick wall is reached! However, that needn't be the end of it ... these ancestors were real people; they weren't just names and dates. They lived lives that had all the usual, or unusual, ups and downs, experiencing joy and sadness, sickness and loss. They had to earn a living and their occupation would probably be dictated by the area in which they lived. Local History! Now comes the fascinating stage of our family research ... fleshing out the bare facts of history by finding the real story of their lives ... Read more

Of course, we have no monthly meetings at the moment, but our members' research continues. If you are a new visitor to the website, please take time to browse the Oldham pages, in the various categories identified in the 'breadcrumbs' (the yellow header on each page).
To help return visitors find 'what's new', HERE is a link to a list of updated, and new items or articles, added to the Oldham pages.

The team of volunteers who man the Society Helpdesk, in Manchester Central Library, includes some of our own Branch members. The Branch committee members, and other volunteers, are always willing  to help members and visitors, with any queries that they might have, after our own monthly meetings. In addition, our monthly newsletter includes an 'e-postbag', in which readers can contribute or request information on a subject of personal interest. Newsletter

back to the top 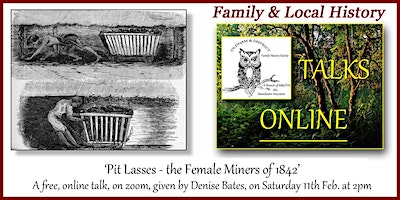 'Pit Lasses - the Female Miners of 1842' An illustrated presentation given by Denise Bates who is an historian and writer. 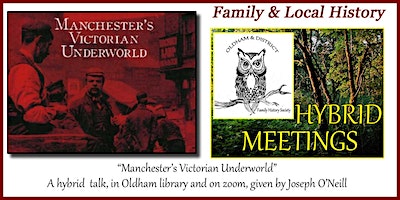 This is a hybrid meeting ... on zoom and in the Library. All are welcome. Booking is only necessary for zoom attendance which is free to all