Now just a rapidly fading memory, the car tax disk made its first appearance on 1 January 1921. For nearly 100 years replacing the tax disk was one of the annual motoring rituals.

A Brief History of the Tax Disk

Motor vehicles had been subject to excise duty from their very earliest days, the duty first being imposed in 1889. Then called the Locomotive Duty, it applied to all mechanically propelled vehicles and was first set at a level of £5.00, the equivalent of over £500 at today's prices, so a considerable imposition. In 1909, the Lloyd George government instituted the 'Road Fund', the idea being that the duty would finance road building and maintenance and the roads would become self-funding. Hypothecation of the duty was abandoned in 1937 but by this time it was already being plundered by government for other purposes. The Road Fund itself survived more or less in name only until 1955. 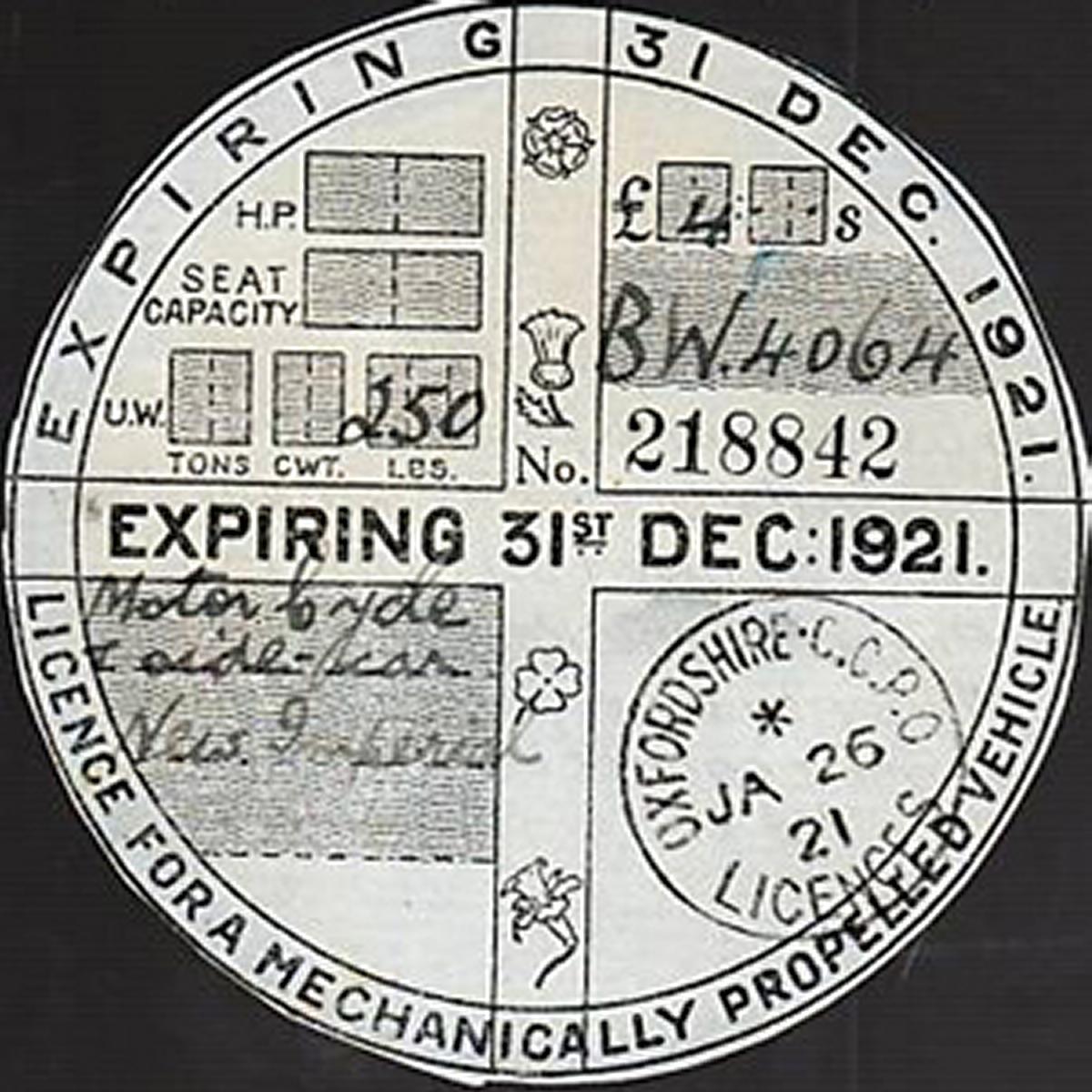 Despite its early introduction, there was no requirement to display evidence that the duty had been paid, making enforcement somewhat difficult and so from 1 January 1921 every registered vehicle was required to display a paper disk showing details of the vehicle concerned and the expiry date of the duty paid.

The disk underwent a variety of changes in style, though always keeping the 3three inch (75mm) circular format. Changes in colour were introduced both to make expired disks more obvious and to make them more difficult to counterfeit.

The requirement to display a tax disk was dropped from 1 October 2014, though you will still see many older vehicles displaying their last disk.

What concern is this to family historians?

It is not so much the excise duty which provides helpful family information, but the requirement to register motor vehicles with the local authority. This dates from 1 January 1904 at which time the familiar registration numbers first appear. The system, though centralised in 1965, continues, to the present day.

Before centralisation local authorities kept records of the vehicles registered with them, generally including make, model, engine capacity and date of manufacture, but more importantly, they kept records of the registered keepers of each vehicle with names and addresses as well as dates of registration and disposal of the vehicle. It seems that many of these early records no longer exist, but an exception is the records for Salford, which survive and are available for reference in Salford Archives. Fortunately for local researchers, society member George Dawes undertook a project some years ago to index the registrations from 1904 to 1928.

These records show, for example, that the first vehicle registered in Salford was Registration No. BA1 a chocolate coloured De Dion. 8.hp.with Tonneau which was registered to: Frederick W Wheatcroft of Eaglesfield House, Broughton.on  1 Jan 1904. The vehick was sold in 1909 but Mr. Wheatcroft does not appear again in the registrations; possibly he moved away from Salford. Not so T. Goodwin Whittaker of the Cattle Market Hotel, Cross Lane, who between 1909 and 1914 registerd first a 10/12 hp Humber, then a 11.9 hp Arrol Johnson and finally a 12 hp Overland.

Some of the vehicle manufacturers are still familiar names: Rolls Royce, Daimler, Ford and Fiat all appear. Most, though, are lost in motoring history: Darracq, Spyker and Cottereau to name but a few. One of these lost names was the local marque of Horbick, produced by Horsfall & Bickham of Bridgewater Works. Pendleton between 1902 and 1909.

The index to Salford Motor Vehicle Registrations can be searched by keeper's name by MLFHS members in The Great Database in the member area of this site. A transcript of the index is also available to members in the Document Collection (General - Miscellaneous).