The setting for the 1921 fashion scene was a post war era beginning to be dominated by Hollywood films and the film stars who were becoming the fashion icons everyone wanted to copy. There was greater spending power for the modern woman, advertising and fashion designers were coming into their own and women were beginning to challenge their roles. They were gaining greater freedom and independence, drove motor cars, smoked cigarettes, typically through a long holder, and had more than active social lives. They revelled in dancing, and looking good on the dance floor wasn’t difficult as fashion designers were picking up on strong primary colours and geometric lines taking their cue from surrealism, impressionist and art deco.

The ‘Roaring Twenties’ and the ‘Jazz Age’ were still in their infancy but fashion was leading the way. Old staid Victorian traditions and customs regarding dress were beginning to disappear. It was off with the constrictions of tight corsets and tight waistlines and on with shorter skirts and looser, somewhat shapeless clothes. These gave more comfort and freedom of movement whether for sporting activities, everyday wear or for dancing the Charleston, the Tango or the Black Bottom. These were the dances of the 1921 ‘flappers’, so named as the fast movements of feet and arms whilst dancing were seen as similar to the flapping of a bird’s wings

Flappers were the outgoing, old customs challenging gals of the era and in addition to seizing the dance floor with their fashion grabbing dresses they also wore high heels, and lavishly applied rouge, lipstick and mascara. Like a lot of women of the era they cut their hair short. 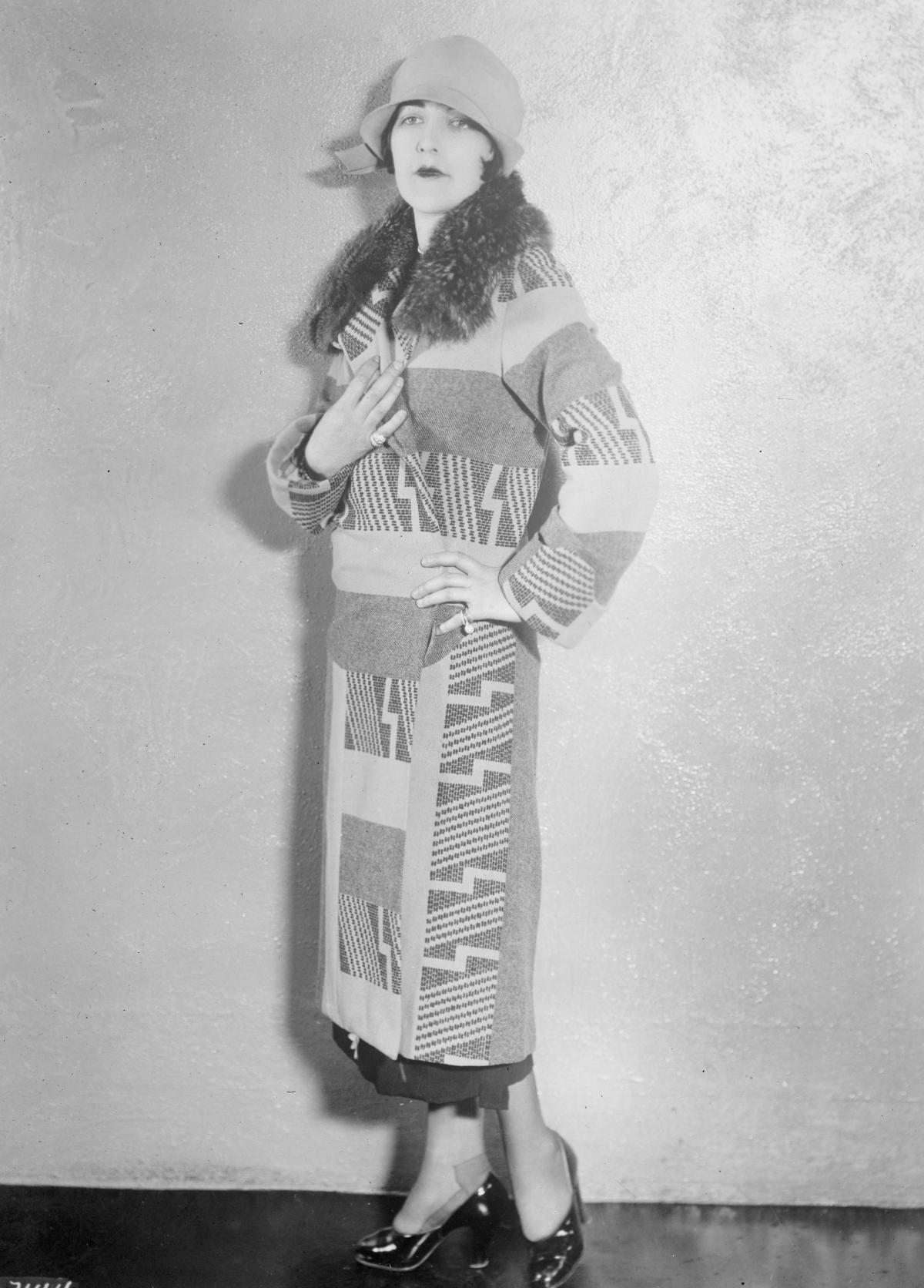 Fabrics were changing too. Cotton and wool had always been basics but the cotton industry was in some turmoil. A lot of cotton mill workers had died during World War 1. There had been a flu epidemic in 1918 and boll weevil had wreaked havoc with cotton crops. As dresses were becoming shorter, less cotton was needed for fabrics which often resulted in fewer workers being needed. Velvet and silk were expensive and luxurious fabrics which only the wealthy could afford. Things were changing though. In the late 1800s a new fabric was being developed from regenerated and purified cellulose derived from plant sources. In Britain Samuel Courtauld and Company were producing this fabric which had the feel and texture of silk. It became known as rayon and was the first man-made fibre.

Added to all the other changes there were other developments in the fashion industry. Fasteners were taking on new forms, with buttons and lacing being replaced by hooks and eyes, buttons, zips and snaps. The servant who helped the wealthy to dress was soon to be out of a job!

The 1921 fashion scene was also the beginning of new designs for underwear, hosiery, swimming costumes, hats, shoes, short hair styles and the wearing of make-up. It can only be imagined the horror some parents and grandparents might have felt about all this very daring carry on!

So, what exactly were the dapper young ladies, and gents, of 1921 wearing? Let’s be daring and start with underwear. The Victorian corset was well and truly out of fashion for the more active generation of women, to be replaced by the thin camisole and cami-knickers typically being made from rayon. In a few years all-in-one lingerie was to become popular. As for hosiery, the flappers led the way by wearing their stocking rolled down to the knees and fastened up with garters.

Donned above these risqué innovations were typically the chemise dress which was becoming very much a classic in 1921. A simple dress with a straight, slim line with no darts, pleats or fitted seams. It was calf length, ankles were showing but dresses were still respectably below the knee. Light reflecting sequins, beading and fringing which would swing whilst dancing might adorn the dresses.

On to outerwear. Coats were usually wrapped over and fastened with a single centre button. The shoulders were broad and the armholes gave plenty of room for movement. Fur coats and fur adornments were available, for the wealthy woman only.

For men there was the expensive full length ‘raccoon coat’ and the loose fitting ‘zoot suit’ with its high-waisted, wide legged trousers and jackets with tight cuffs, wide lapels and wide padded shoulders. For more formal occasions there was the double breasted ‘tuxedo’ dinner jacket usually worn with a black waistcoat and black bow tie. The waistcoat could be discarded for the double or single breasted dinner jacket to be replaced by a cummerbund worn around the waist.

In 1921 men’s dress shirts had a rigid, detachable collar with buttons to the back and front. Men would certainly have a stiff neck and these collars were soon replaced by softer more comfortable attached collars. For less formal wear men’s jackets became high-waisted, had narrow lapels which could be buttoned up and the jackets were often worn with a belt.

Trousers generally became narrower and shorter below which a pair of diamond patterned argyle socks could be seen. The sporting gentleman might wear ‘plus four’ trousers, so called as they were four inches longer than knickerbockers. These were short baggy trousers, tight below the knee, typically worn by the gentleman, or lady, golfer.

Taking a cue from men, aviator Amy Johnson adopted knickerbockers for her flying adventures. They became a fashion item for the active woman and were often worn with a shirt and tie. 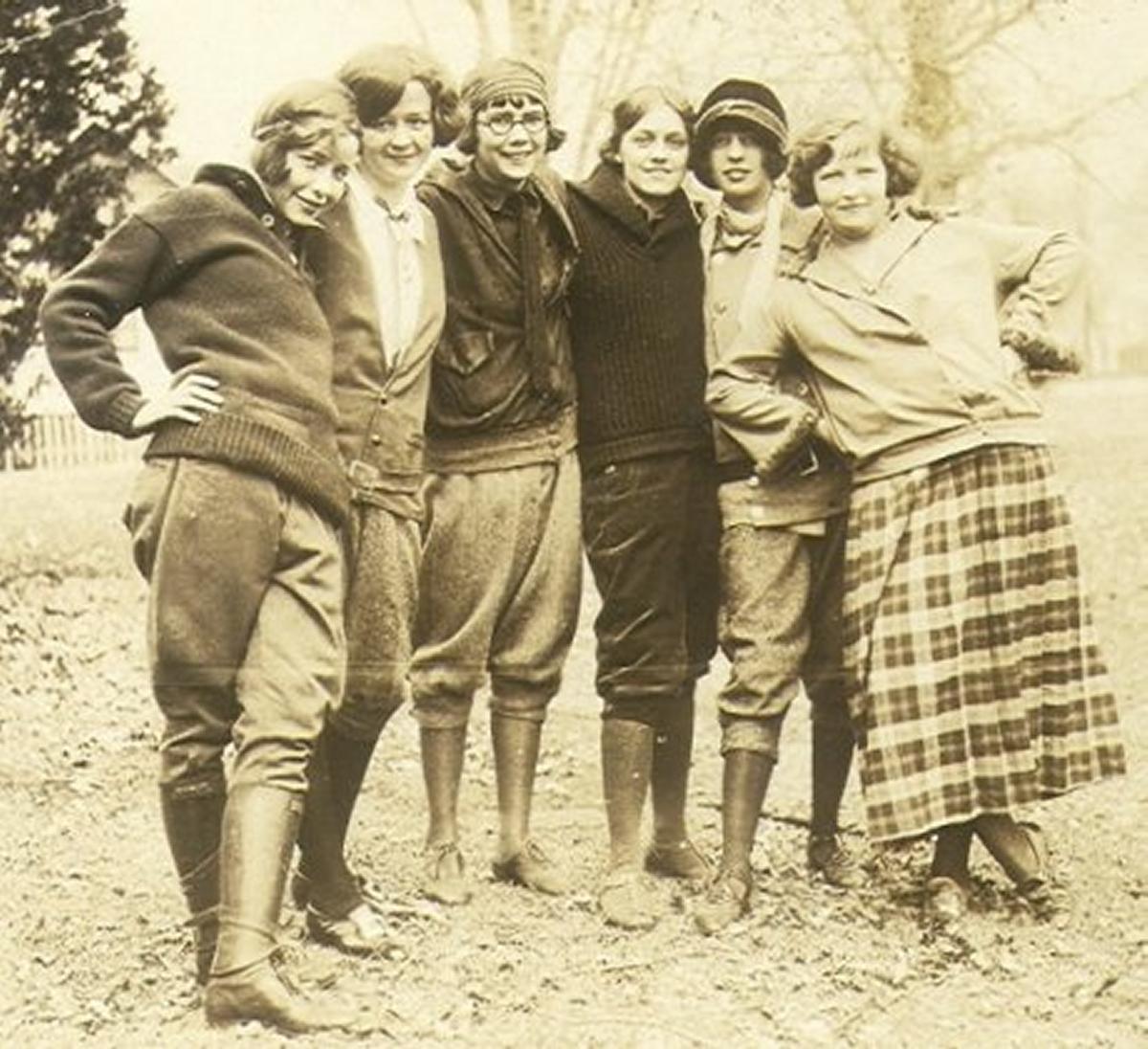 As fashion was now exposing women’s ankles, shoes had to become a fashion item. ‘Mary Janes’ with ankle straps, pumps with no straps and t-straps were the most common.

The dapper man of 1921 could be seen shod in black or brown brogues with small perforated holes decorating the toe caps and seams. Or he might have been wearing two tone shoes or patent leather wing tip shoes, both popular for day and evening wear. Men’s shoes could be topped with spats (spatterdashes), usually made of white cloth, grey or brown felt material and buttoned around the ankle to protect shoes from mud or rain but were also worn as a fashion item.

On the beach women’s fashions were changing too. Swimming costumes were skimpier, necklines were lower, arms were exposed, as were legs to the mid-thigh. Typically women wore a long top covering shorts and wore matching stockings.

There were also several new fashionable hair styles for both men and women in 1921. For women these included the ‘Dutch Bob’, the ‘Eton Crop’, the ‘Castle bob’ and the ‘Shingle bob’ and the ‘Marcel Wave’ a waved version of these short hairstyles achieved by the use of heated curling irons. Not all women were brave enough to bob their hair in 1921 so pinned it up to make it look short.

No lady or gentlemen would be seen out without a hat so there was a design ethos to these too. The cloche style was the most common and for evening wear these were much fancier, being made from beads or lace.

For men there was the top hat for formal occasions, the bowler hat, as popularised by Charlie Chaplin, the straw boater and the fedora with a wide brim and indented crown.

Caps, bigger and bulkier than today’s versions and made of cloth, were worn for sporting occasions by the wealthier but were a regular item of headwear for working class men and boys. 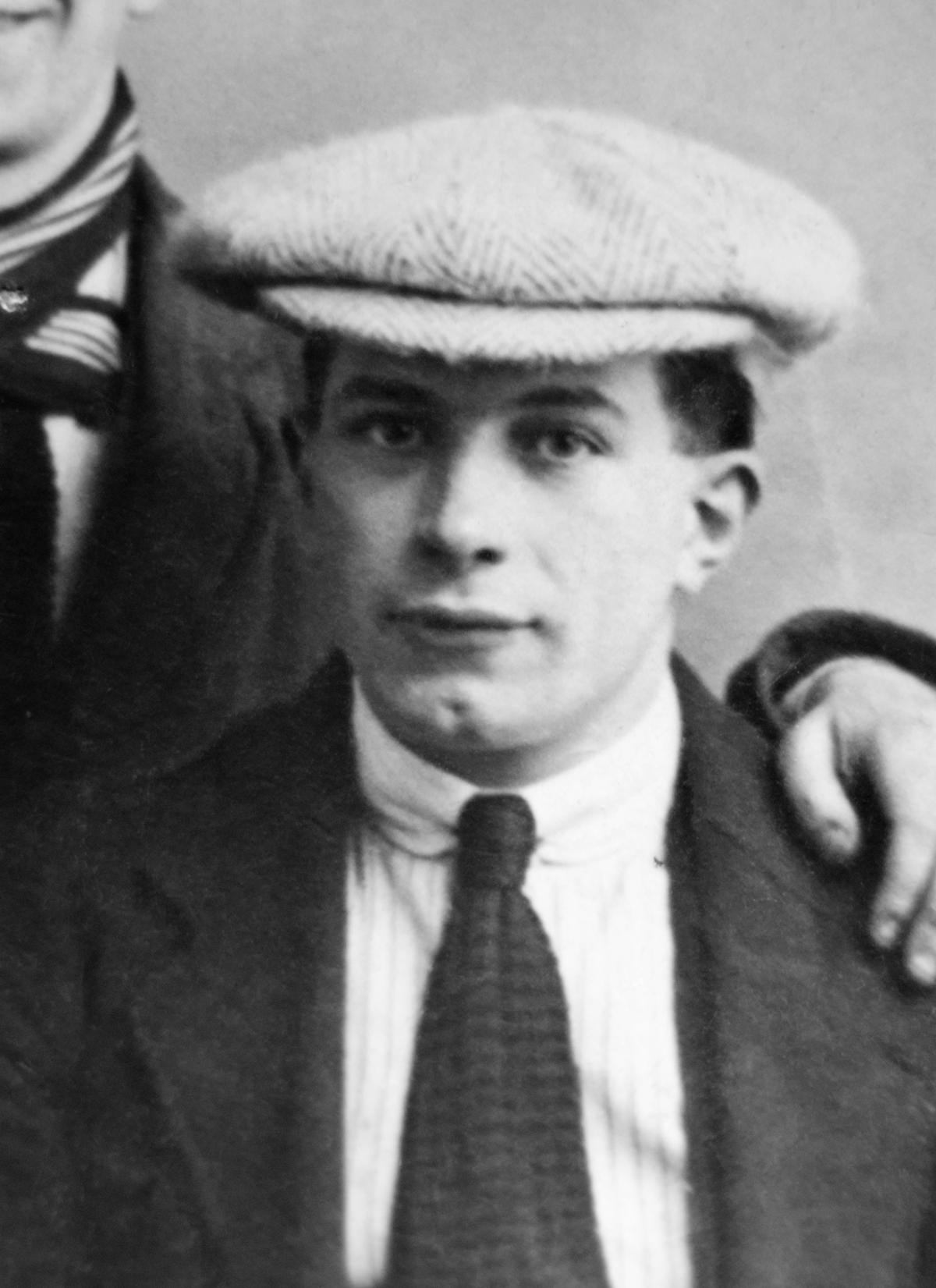 Uncle Jim
© image from the family album of Leslie Turner

Cosmetics were becoming a big industry during the early 1920s. Women began wearing foundation and using eye shadow, mascara and rouge. Lipstick was born, but as the swivel lipstick had not yet been invented (this was to come in 1925) lipstick came in a metal tube, the Levy Tube developed by Maurice Levy in 1915. This had a small lever at the side that lowered and raised the lipstick. Lips could then be painted with bright colours into a ‘cupid’s bow’ or ‘bee sting’ look.

Looking good in their own way, men had short, shiny, slicked back hair parted at the side or down the middle. Pomade was an essential for achieving this look. In the 19th century this may have been made using bear fat. In 1921 the common ingredients were petroleum jelly, beeswax or lard. All we can say today is “urggghhh”.

So, who were the fashion designers of this transformative age? Amongst many names were those of Jean Patou, Norman Hartell, Madeleine Vionnet and Coco Chanel.

Jean Patou made the cardigan popular. His designs used geometric shapes were comfortable for outdoor wear and sports. He was known for the daring sleeveless, knee length tennis dress he designed for tennis champion Suzanne Lenglen.

Norman Hartnell designs were bedecked with extravagant and expensive embroidery. He was a favourite of the wealthy and went on to design for the British Royal family.

Madeleine Vionnet introduced the ‘bias cut’ which involved cutting cloth diagonal to the grain. This meant it could cling to the body and also move with the wearer. She is known for her handkerchief dress designs and the cowl neck and halter tops, not so much fashion now, as we know they are just as much a classic as they were in 1921.

Coco Chanel was as daring in her life as she was in her designs. She was one of the first women to wear trousers, to cut her hair short and to ditch the corset. She was a favourite of film star Marlene Dietrich and her Garconne, or boyish styles, were seen as both daring and innovative. She took her design ideas from the likes of sailors and mechanics outfits and they were ideal for both sport and casual wear. For more formal, or maybe even romantic occasions, a dash of Chanel No. 5, which was introduced in 1921, could be delicately patted on, or even lavishly applied if one desired. This was a year of some extravagance!