Cinemas were well established in Manchester by 1921. The Manchester Evening News in January of that year advertised the programmes at several cinemas: 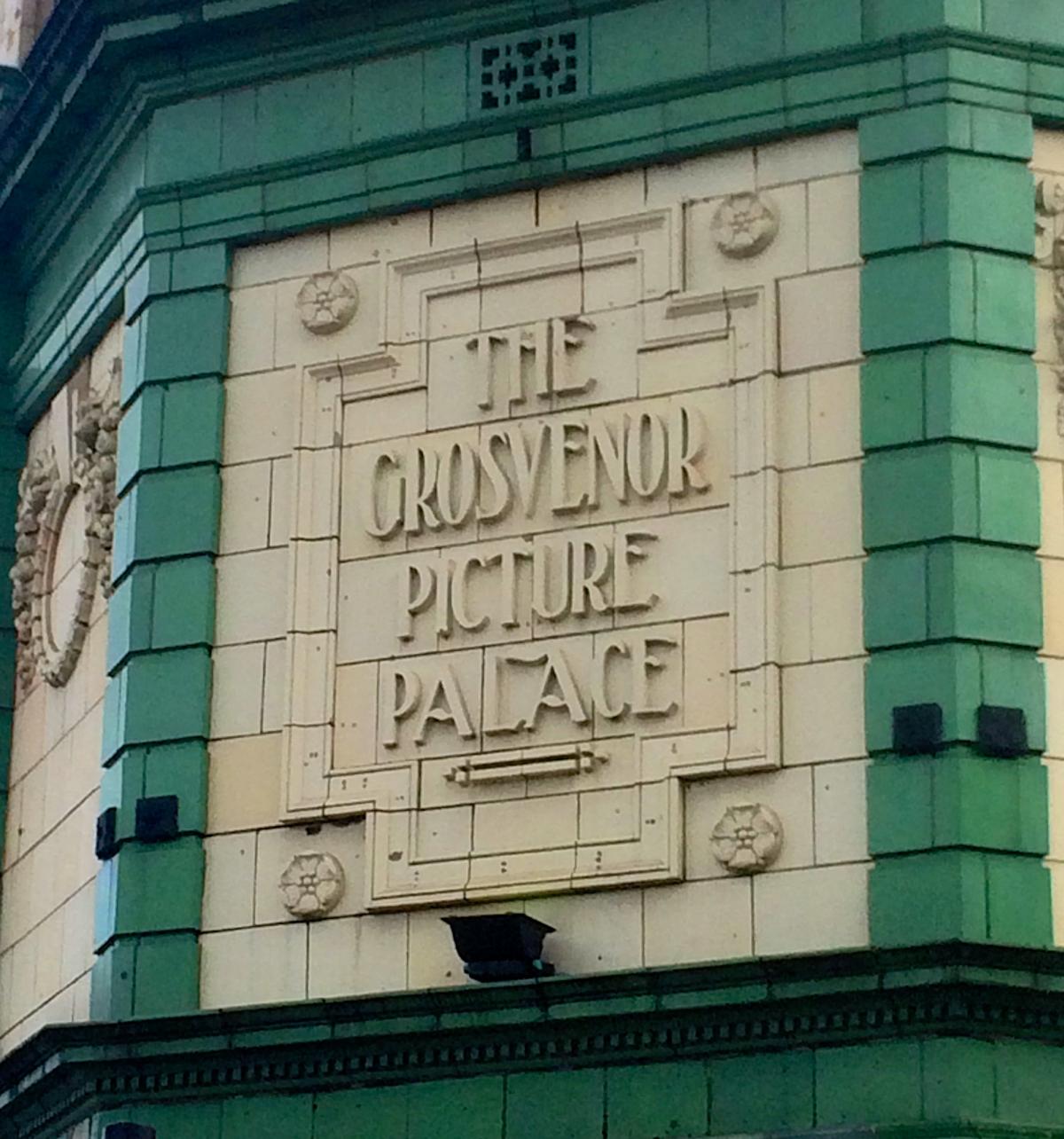 Early moving pictures had been shown as a novelty in a variety of re-purposed venues such as theatres, music halls and even tents but by 1921 venues were either being purpose-built or converted from other uses. A good example is the Midland Cinema, which had started life as the Midland Theatre but towards the end of 1920 had been converted to a full-time cinema. In early 1921 the Gaiety Theatre had been purchased by the owners of The Futurist cinema and were planning to re-open it as a cinema later in the year following a conversion expected to cost up to £20,000. Times were changing, much as they would later in the century as television threatened the future of cinema.

These changes were not universally welcomed. Aside from the concerns about the threat to theatres, there were those opposed to the industry as a whole. One such was Councillor Moore of Preston, who when opposing an application for a new cinema licence declared "Cinemas absorbed and did not create wealth". Clearly Councillor Moore had led a sheltered life and was unaware of the fortunes being made in Hollywood! There will always be those who oppose innovation.

The movies on offer at Manchester's cinemas in January 1921 are now long-forgotten, probably even by the most ardent movie buffs, and included Her Story at the Midland, Eathhbound at Ardwick and Too Much Johnson at The Grosvenor. The offering at The Futurist cinema was a local production Her Benny which is advertised as "...adapted from the famous novel of the Rev. Silas K Hocking of Manchester. Produced in Liverpool and Eastham by Billy Millward of Manchester". 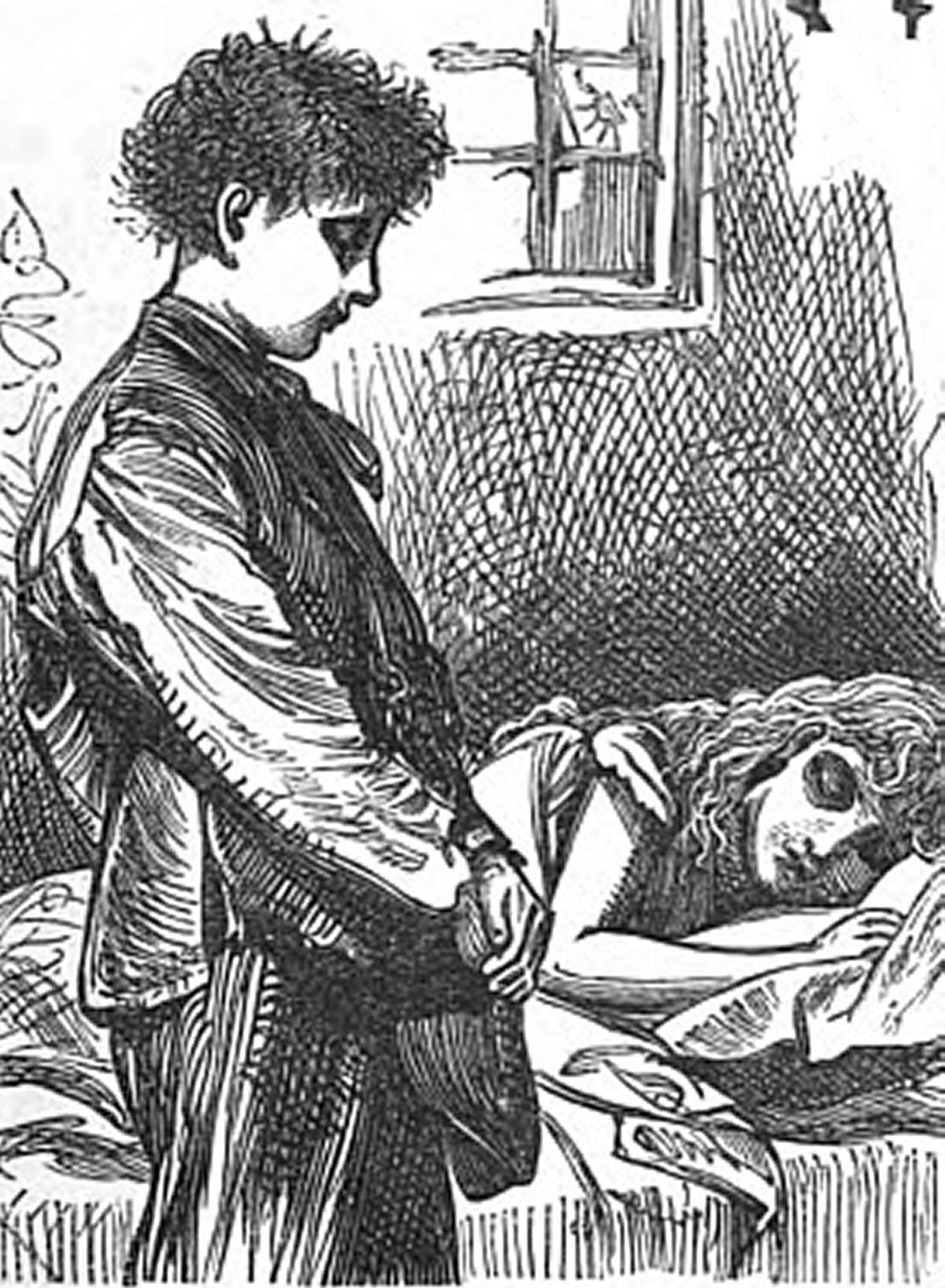 Illustration by Harry Tuck, from an early hardback edition of
'Her Benny, by Silas K. Hocking, published by
Frederick Warne and Co., in 1879

The story of Benny Bates, a 10 year old runaway from Liverpool, bears a close resemblance to Mrs. Linnaeus Banks' famous novel The Manchester Man. Benny and his sister are taken in by good people and raised in the Christian virtues. Starting work as an office boy, he finally rises to partnership and marries the boss's daughter Eva, though not before he is disgraced by a wrongful accusation of theft and redeemed by saving Eva by stopping a runaway carriage.

Unremembered a century later the movie Her Benny may be, but the same cannot be said of two of the top movies from census year. The first of these being Charlie Chaplin in The Kid. 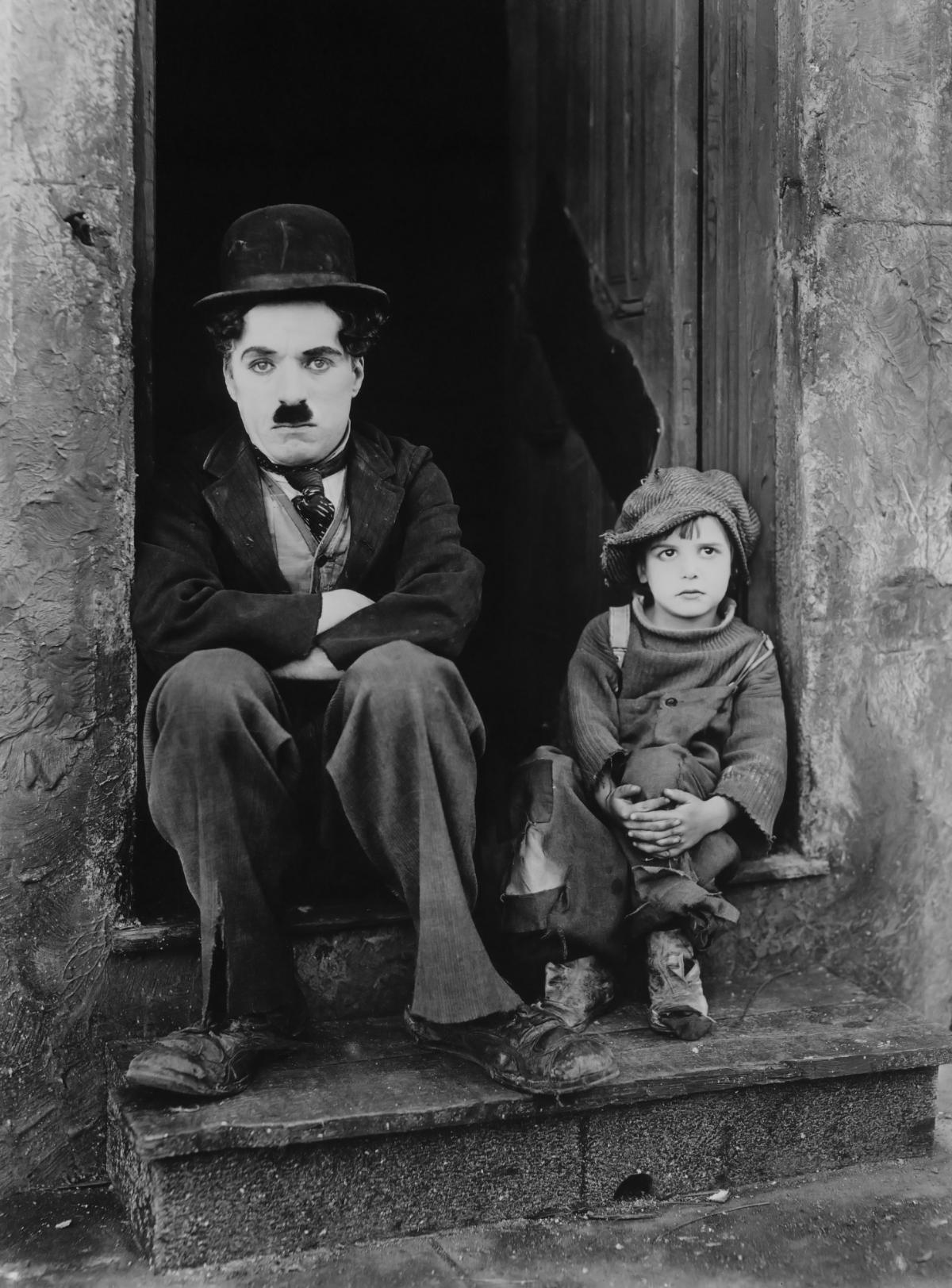 Charlie Chaplin and Jackie Gleason in The Kid

The Kid has much in common with Her Benny. Chaplin as the tramp takes in an abandoned baby and raises him as his own. Reverend Hocking would not have approved of the tramp's idea of work for the boy - breaking windows so that he can then, working as a glazier, repair them. At the end of the movie the boy and his mother, who is now a successful actress living in a mansion, are reunited and the tramp apparently redeemed from his life on the streets. The movie introduced Jackie Coogan, who would in time become a significant movie star in his own right.

The other major movie of 1921 was The Sheik. 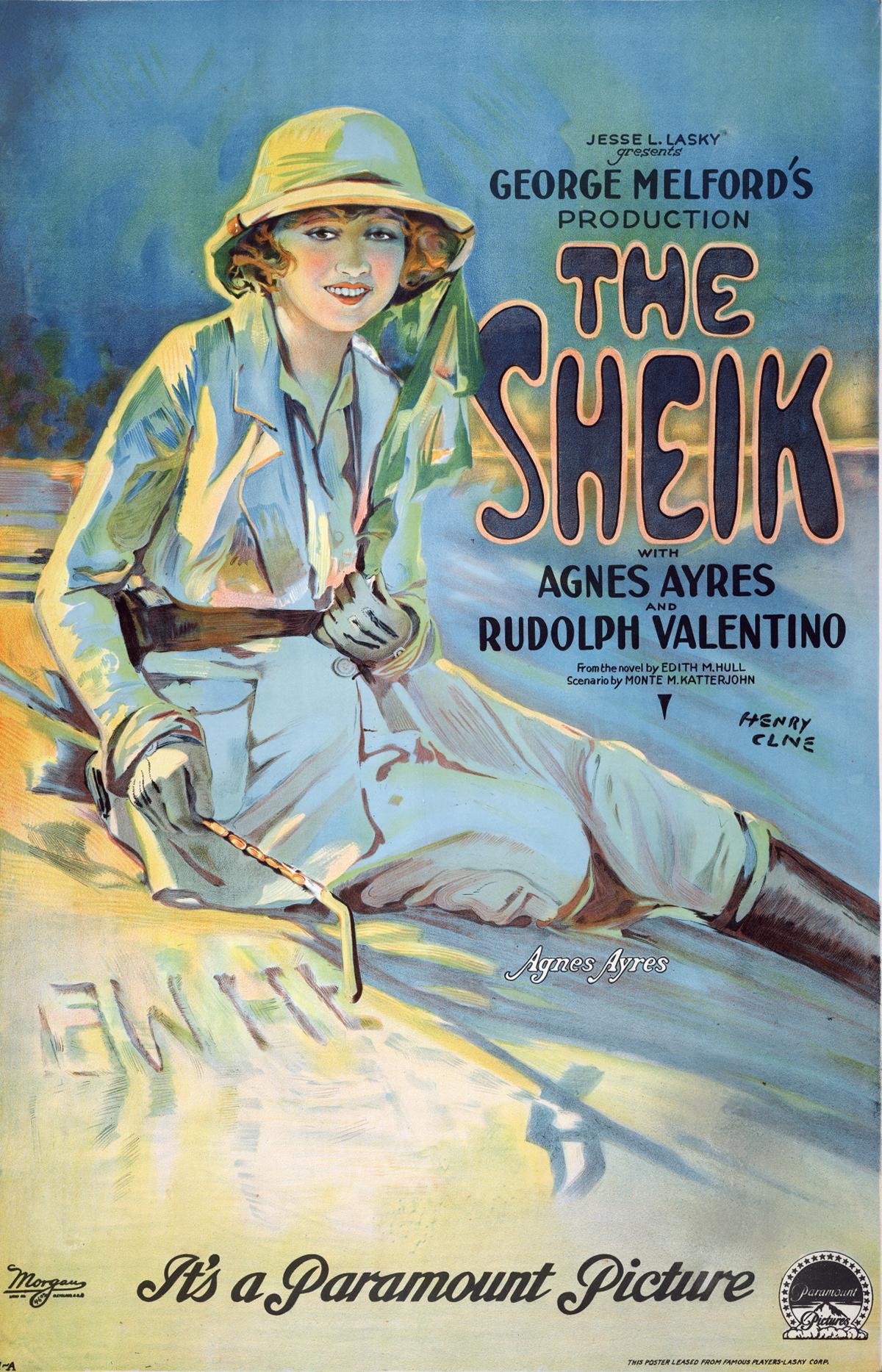 Poster for The Sheik

The Sheik was based on a novel by Edith Maude Hull and is altogether racier fare than The Kid. Lady Diana Mayo (Agnes Ayres) is abducted by Sheik Ahmed Ben Hassan (Rudolph Valentino) and held at his camp. She escapes, only to be captured by the bandit Omair (Walter Long). Ahmed rides to her rescue from "a fate worse than death", kills Omair but is seriously wounded. Lady Diana finds that she has come to love Ahmed. The social impossibility of a relationship with an Arab is neatly overcome when it is revealed that Ahmed was the son of a British father and a Spanish mother who had died in the desert and had been taken in as an orphan by the old Sheik. Lady Diana declares her love and, it would appear, lived happily ever after. The popularity of the movie inspired the writing of the popular song "The Sheik of Araby".

The Sheik was a controversial move. While the movie adaptation omitted the rape of Lady Diana by Ahmed, the closeness of the relationship between an Englishwoman and a man who was (even if only apparently) an Arab was well outside what would have been seen as socially acceptable. Although released towards the end of 1921, The Sheik does not appear to have been screened in Manchester (at The Gaiety Cinema) until February 1923.

1921 saw a major movieland scandal. One of the new movies of 1921 was Brewster's Millions. Based on a 1902 book, Brewster's Millions may be one of the most re-made movies ever. A version had already been released in 1914 and the 1921 production was to be followed by new versions in 1921, 1926, 1945 and 1985. The 1921 version starred Roscoe "Fatty" Arbuckle and it was to be Arbuckle's penultimate movie. Following the release of his next movie Crazy to Marry, his friend Fred Fischbach planned a big party at the St. Francis Hotel in San Francisco to celebrate. The party resulted in the death of a minor actress called Virginia Rappe and Arbuckle was charged with her rape and manslaughter. After three trials, Arbuckle was finally acquitted, but his career was ruined.

Crime mysteries were popular in 1921 as they are today and one of the more important releases was The Hound of the Baskervilles. While this was the earliest English language version and was filmed in England, it had been beaten to market by Der Hund von Baskerville, a German version released seven years earlier. There have been many later versions of which possibly the 1939 version with Basil Rathbone and Nigel Bruce may be the best remembered. 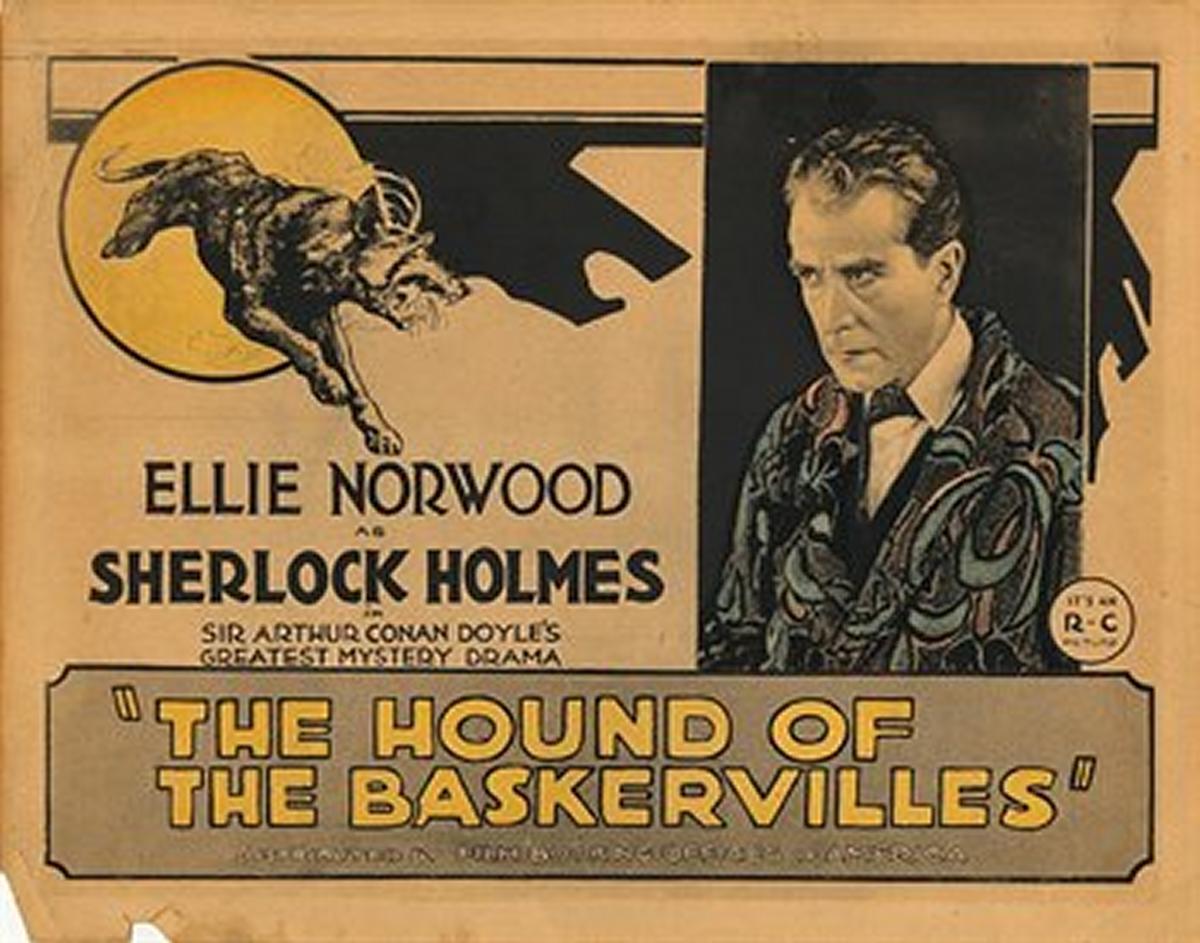 The Hound of the Baskervilles - Poster

Science fiction was well established as a genre. A Message From Mars invoked an outer space theme, though the plot involves more the delivery of a moral message than an Earth versus Aliens conflict. More impressive is The Mechanical Man (L'uomo meccanico), an Italian production in which the design for the eponymous robot is stolen from its inventor and the robot turned into an instrument of robbery and murder. 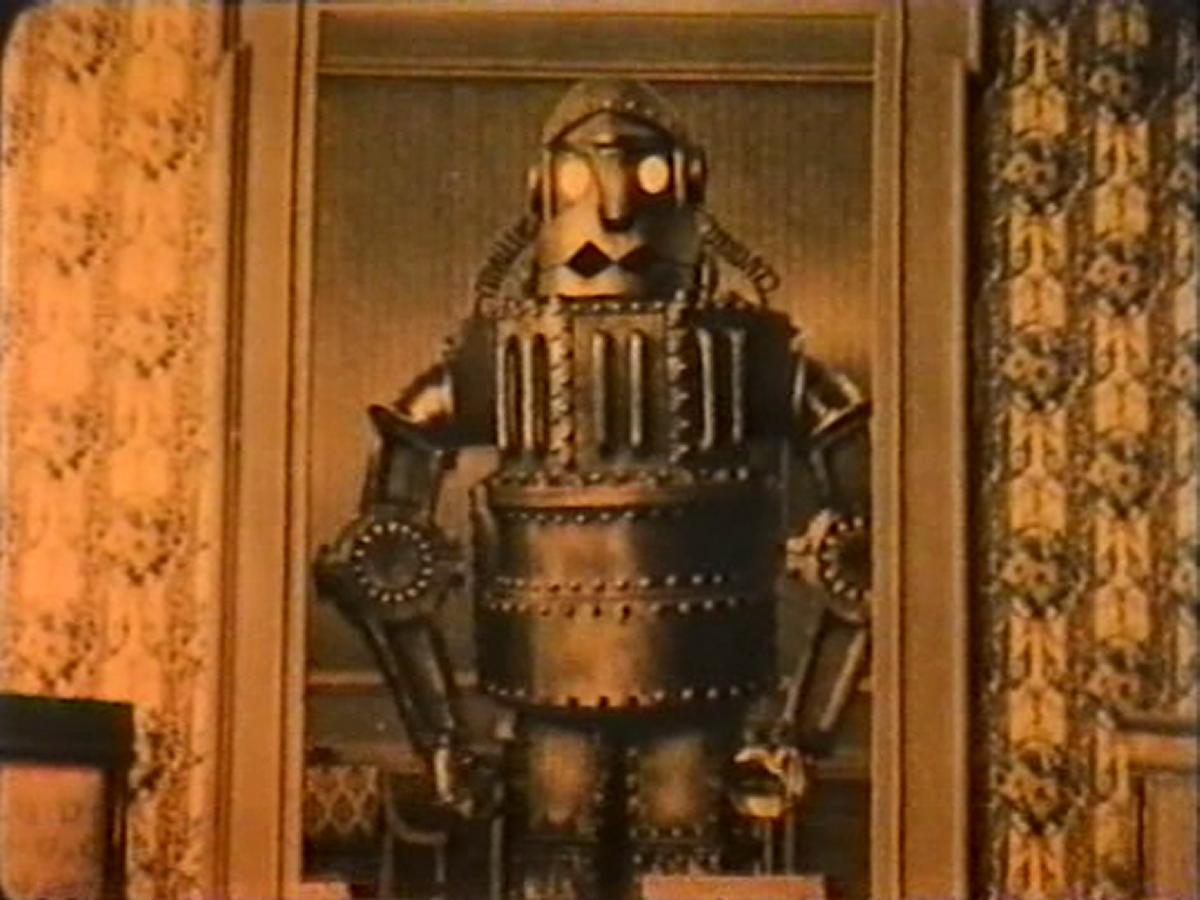 Making his first screen appearance in 1921 was Count Dracula in Dracula's Death, a (now lost) Hungarian movie which just pipped the German director F. W. Murnau's Nosferatu to the post. Murnau's adaptation of the Dracula story released in 1922 is, however, the first surviving movie in the long-running vampire genre. It is very unlikely that Manchester's moviegoers would have seen the 1921 production.