Since this is a family history society, and Dick, Kerr Ladies were Preston-based, I thought it would be interesting to see what information could be gleaned about the family circumstances of the team members in and around 1921. Just having names, and sometimes only initials, of the members of the team in 1921/22 is often not enough to begin to trace them in terms of family history.  By good fortune, the team's trip to Canada and the USA in the autumn of 1922 provides some invaluable starting points in the form of immigration and emigration records. Some early members of the team are not included in this review, as they had left by the time the team travelled across the Atlantic.  Other well-known players joined the team in later years. 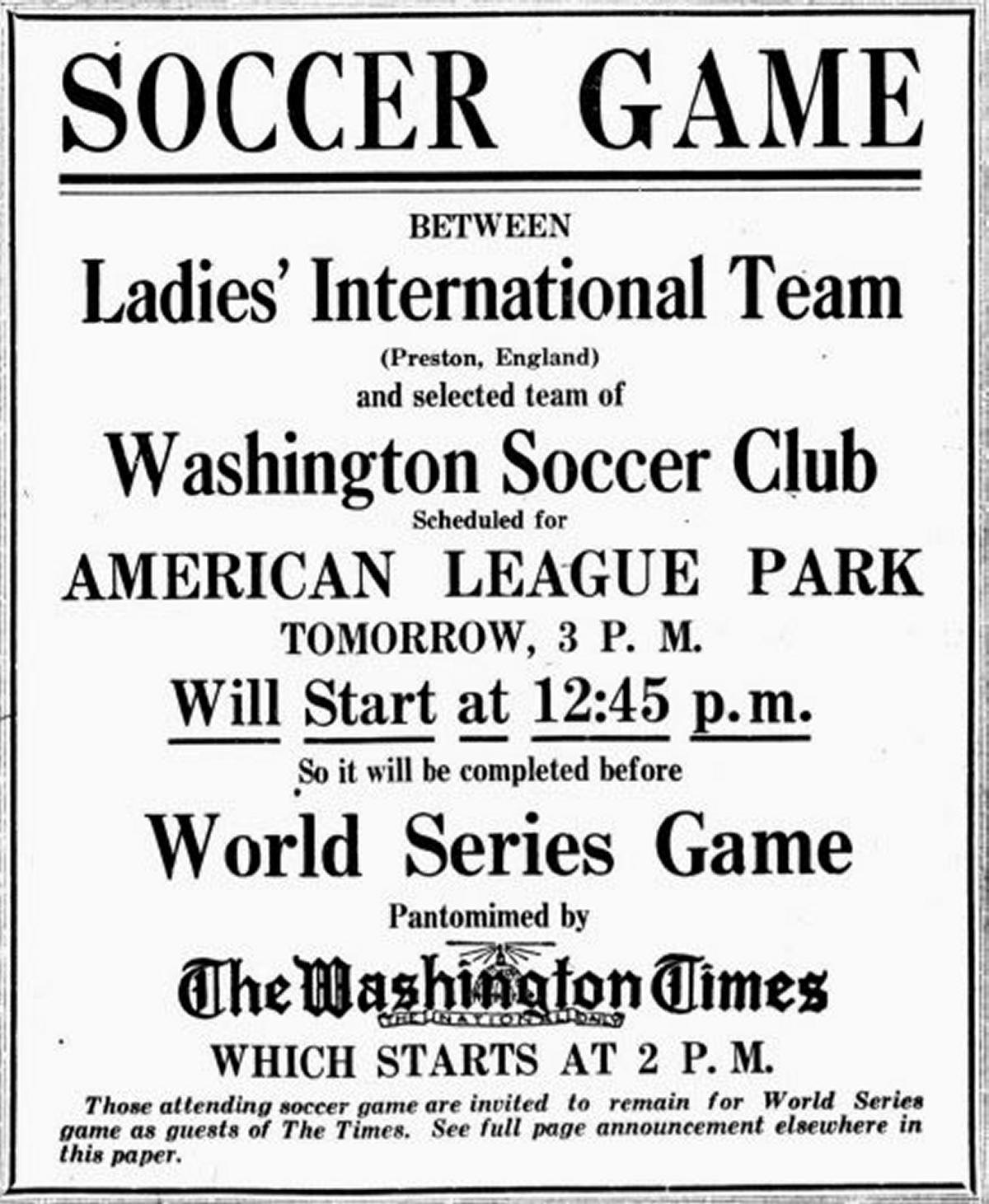 Advertisement for the USA Tour

The first such record is found in Ancestry's UK and Ireland, Outward Passenger Lists, 1890-1960; Liverpool – 1922 – September.  This record shows 13 women and three men in numerical contract ticket numbers from 58269-58278, and 59630-59635.  Also listed are their last address in the United Kingdom, their occupations and ages, and, rather bizarrely, their country of intended future permanent residence, shown as the USA.  There is a pencilled line joining all these entries, with the letters M5A next to it.  Whatever this annotation means, the line has the effect of linking these travellers together.  The ship "Montclare" left Liverpool on 15 September 1922.

A further, and more detailed resource comes with 'U.S. Border Crossings from Canada to U.S. 1895-1960; M1464 – St. Albans, Vermont, 1895-1954 401-450, 446.  List or Manifest of Alien Passengers for the United States.  Passengers sailing from Liverpool on SS "Montclare" on 15 September 1922.'   This record includes name, age, marital status, calling or occupation; nationality (for the team, 'English'); name and address of nearest relative or friend in country whence alien comes; final destination (all travelling with the team had this listed as Football tour, England); who paid for the passage ('football tour'); name and complete address of relative or friend being visited in USA (in this case, 'Touring with football club'); length of stay in US (2 months); height; complexion; colour of hair and eyes; country and city or town where born.

Another really helpful resource is incoming and outgoing passenger lists.  Knowing that the team went to Canada in 1922 makes it easy to find them on the White Star Line’s "Adriatic", returning into Liverpool from New York on 22 November 1922.  They shared the journey (but definitely  not the style of accommodation) with ‘Egerton of Tatton, of Tatton Park, Knutsford, Rancher, 48’.

Gail Newsham's website lists the names of all those who played for Dick, Kerr Ladies. Her 'first match players' and 'through the decades' sections give brief details of the women and their footballing prowess, with some follow up information about marriage or subsequent career. To supplement this information, I provide here the information given in the Border Crossing records (which I have called LMAP) and the information given on the incoming passenger list (IPL).  Three men traveled in the party, and they are included here.  Intriguingly, Maurice Lord Egerton traveled out and back on the same ships as the Dick, Kerr Ladies team.  Did he have anything to do with the tour?

The LMAP information in particular facilitates further searching, since age is given in years and months, birthplace is given, and in many cases, the name of a parent or other near relative.  Here I also show results from the 1911 Census and the 1939 Register, where applicable.

[The book referenced below by Barbara Jacobs can be seen in part on Google books.  It includes anecdotal material about the team's journey on the "Montclare", and shows that the tour was arranged between David Brooks and Abe Zelickman.  The text is not entirely complimentary.]

On the 1922 tour, Herbert Stanley was the team Trainer.

1911: Appears as family servant to the family of Martha Thomson, Widow, at 3 Park Vale Road, Walton on the Hill.

1901: 48 Breeze Lane with her parents Thomas and Mary, and 8 siblings.  Her father, born in Wigan, is a Carter on Farm, as is one of her siblings.  No occupation or 'school' is given for the 6 children aged 13 and under.

[She features in the Welsh/Medway family tree on Ancestry, showing that as Daisy McGowan she died in Rhode Island in 1968]

1923 Alice Mills arrives in Boston, her passage paid by her aunt in Pawtucket, RI. She subsequently marries J Aime Lambert and becomes a naturalised US citizen.

Find a Grave website shows that Lily died in St Helens on 24 May 1978.

Lily Parr was the first woman inducted into the Football Hall of Fame in 2002.  See the recently unveiled display about her and her teammates at the National Football Museum, unveiled in July 2021. https://www.nationalfootballmuseum.com/news/new-display-tells-story-of-lily-parr-and-her-trailblazing-teammates/

Carmen Pomies was French and does not appear in English records for 1911 or 1939.

Her father Peter died in the early 1900s and her mother had re-married. Jessie died in Surrey in 1935, a mental nurse.

20 March 1899 - 1991.  A sprinter before joining Dick, Kerr Ladies in 1920.  Ran in the first meet under Amateur Athletic Association rules to allow women to compete, in Blackpool in 1918.  https://en.wikipedia.org/wiki/Alice_Woods_(footballer)  Married Herbert Stanley.