It is well known that the date for the 1921 Census had to be put back by two months owing to uncertainty around the threatened coal strike.  The government had returned the coal mines to private ownership on 31 March 1921 owing to a trade depression and falling coal exports.  After the mine owners demanded wage cuts, the Miners’ Federation of Great Britain called on the so-called Triple Alliance of transport workers, railwaymen and coal miners to come out on strike, and to stop the movement of coal. The day of action was to be 15 April, threatening serious disruption to the carrying out of the Census on the night of 24/25 April.  In the event, the 'Triple Alliance’ did not hold together, and only the coal miners struck, holding out until the end of June.

The damage had been done.  Distribution of the Census schedules was due to begin on 16 April. Anxious as to the effect of widespread industrial action on this activity, Sir A. Mond announced to the House of Commons on 14 April that the Census would not take place on 24 April, and that a revised date would be announced in due course.  On 17 April, the Observer ran a headline: 'Census still postponed.  No intention of reprinting the schedules'.  The article explained that the new date was yet to be decided.

There was no intention to reprint the original schedules, and a plan was yet to be made as to how to notify the change of dates on or with the 12 million schedules when they were eventually delivered.  They included instructions about filling in the forms.  Prominent in these, of course, was the all-important date of the Census Night - 24/25 April.  To reprint the entire schedule was seen as unreasonably costly.

On 7 May 1921 The Manchester Guardian carried the headline 'Why the Census was Postponed. The Cost to the Nation’. (From our London Correspondent.) London, Friday.  The article explained that printed slips would be delivered with each census schedule from 12 June, with words to the effect of: "For April 24 read June 19". These slips saved the cost of reprinting the whole schedule, which could have amounted to around £25,000. The postponement had also involved 1,800 telegrams to registrars, who had to notify 38,000 enumerators.  Wireless messages and telegraphic notices had to be sent to ships at sea, customs officers and others.

Registrar General S P Vivian explained the reasons for the postponement at Somerset House and said the total cost of the Census was to have been £300,000.  Accurate results could not have been obtained 'in the disturbed state in which the country was three weeks ago.’  Keeping in mind population moves in holiday months after 25 June, such as those of Bolton and Nelson and the Penistone feast,19 June was 'the latest possible date which could be fixed short of November'.  Even that did not avoid the Macclesfield holiday, 'but otherwise the exodus of people to seaside towns would be comparatively slight'.

On 12 June 1921, The Observer reported:  The Census. Delivery of Schedules. Handsome Advertising Revenue. Distribution of schedules started yesterday, with the enclosed slips explaining that 'where the dates Sunday and Monday, April 24 and 25 occur, Sunday and Monday, June 19 and 20, must be read.  The back of this correction slip has been sold to a firm of advertising agents, who are paying £1,000 for the use of each million copies.  The revenue which is thus being derived will go a long way towards covering the cost of the postponement.'

The Observer's report related to an advertisement for Horatio Bottomley's forthcoming publication Sunday Illustrated which was set to be launched on Sunday 3 July. 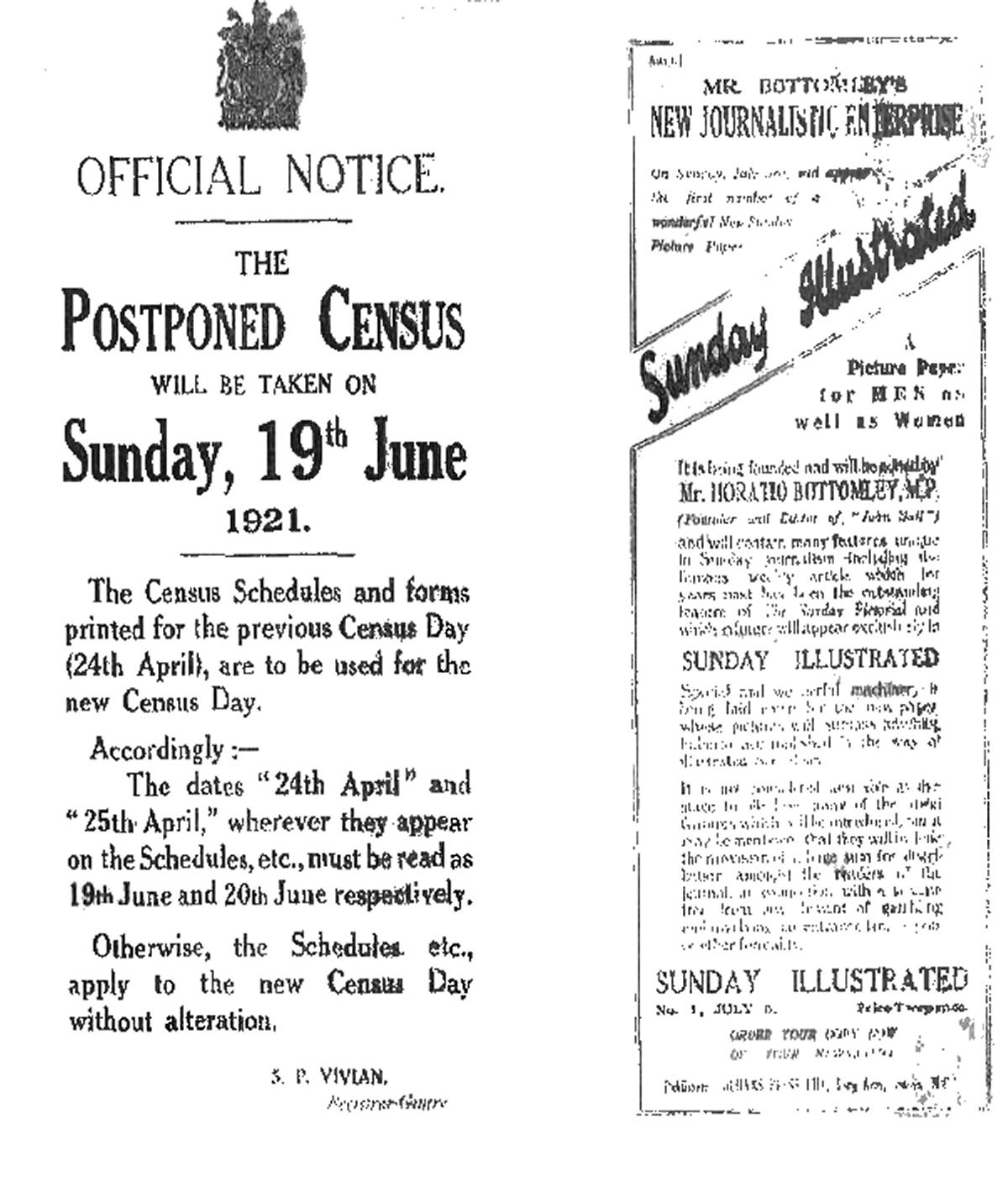 The sale of this advertising space, while rewarding the Exchequer, caused some concern in Parliament, and a series of questions was asked about tendering for the sale of space, and the outcome in terms of suitability for what could be seen as government endorsement of a product.

Mr. GRUNDY asked the Home Secretary whether a private advertisement of a newspaper appears on the back of the official form delivered with the census paper; and whether he gave his sanction to the use of a State form for this purpose?

Sir A. MOND: Yes, Sir. The document is not a form to be filled up, but simply a leaflet which had to be issued notifying the change of dates resulting from the postponement of the census. I was advised that I could provide for the whole cost of that postponement by letting the back of the leaflet for an advertisement to be contracted for by the Stationery Office. The result has, in fact, been to relieve the taxpayer of the whole cost.

Mr. J. JONES asked the Home Secretary the price being paid for the space on the back of the official form delivered with the census paper; and whether the contract for a private advertisement was entered into without the knowledge of other possible advertisers, and without any effort being made to secure the highest bidder?

Mr. YOUNG: The price paid to the Stationery Office is at the rate of £900 per million leaflets issued. The total revenue is estimated at £9,900. The most likely advertising agents were invited to tender, and the contract was awarded to the highest tenderer.

Colonel NEWMAN asked the Minister of Health why a notice describing a new journalistic enterprise by a Member of this House, and explaining that a novel feature would be the distribution of a large sum of money to readers of the enterprise free from the element of gambling and involving no coupon or such like formality, was printed on the back of the official notice enacting that the postponed Census would be taken on Sunday of this week; was this privilege accorded to the hon. Member free of cost; and, if not, can he give the sum that was paid to obtain it?

Colonel NEWMAN: Will the hon. Member answer the last part of my question: Was that privilege given free of cost or what sum was paid for it?

Mr. YOUNG: That was specifically answered the other day.

Captain Viscount CURZON asked the Home Secretary whether the new Census forms are being sent out with a covering slip containing an advertisement for the hon. Member for South Hackney [Horatio Bottomley]; whether this was done with his approval; and is he aware that there is, in consequence, considerable danger of the character of the document being mistaken?

Sir A. MOND: As I have already stated in reply to a similar question by the hon. Member for Rother Valley, the document is not a form to be filled up, but simply a leaflet which had to be issued notifying the change of dates resulting from the postponement of the Census. I was advised that I could provide for the whole cost of that postponement by letting the back of the leaflet for an advertisement to be contracted for by the Stationery Office. The result has in fact been to relieve the taxpayer of the whole cost.

Viscount CURZON:Does the right hon. Gentleman not think the covering slip was liable to be mistaken for an advertisement for "John Bull,[Bottomley’s publication]" and therefore put into the waste paper basket?

Sir A. MOND: I should not think so.

Captain ELLIOT:Is it not the case that by this means the hon. Member for South Hackney got the advertisement for his paper delivered at every house for the cost of one farthing, whereas the Postmaster-General would have charged him 1d? Is that consistent with anti-waste?

Viscountess ASTOR: Is it not rather expensive economy?

Who was Horatio Bottomley, and what publications were referred to above? 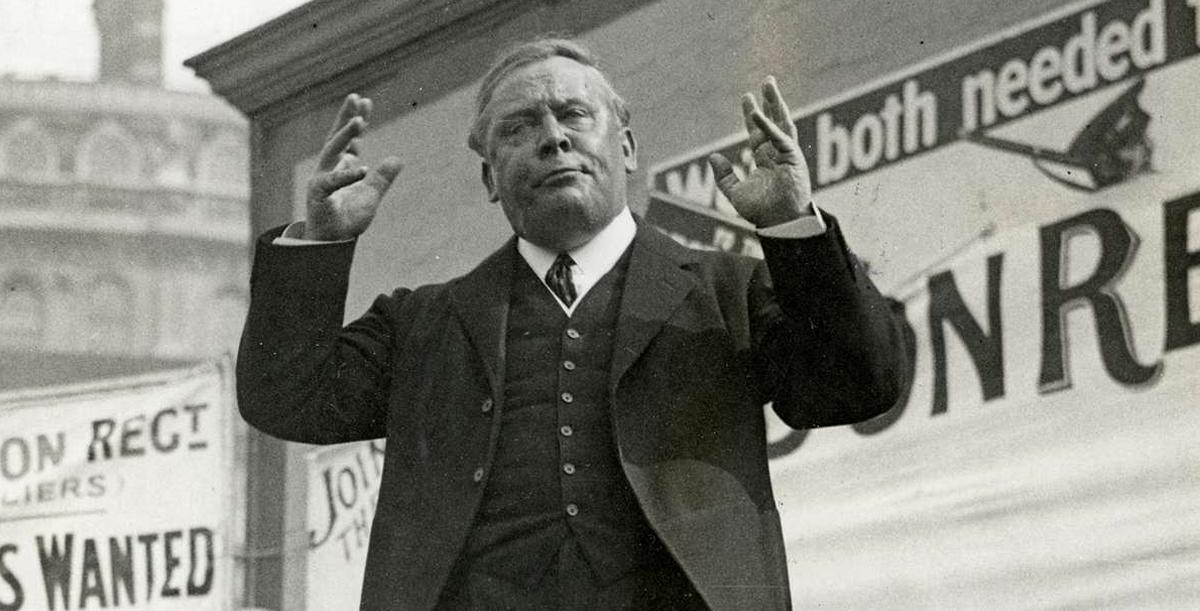 Horatio Bottomley, was born of humble means in 1860, and orphaned by the age of four.  He was initially raised by various relatives, then sent to an orphanage in Birmingham, from which he embarked aged 14 on a lifetime of journalism, investment, womanising, fraud  and politics.  Relevant to this article were his proprietorship of the John Bull magazine, which offered 'an appealing mixture of topical political, social and economic content in a relatively high quality penny magazine'. (1)

Bottomley was elected to represent Hackney South in 1906, but his various business enterprises failed, and after declaring bankruptcy he left Parliament in February 1912.

With the advent of the First World War, Bottomley used his rhetorical skills speaking at recruiting meetings at the same time as criticising the government.  He joined with others to set up an organisation called The Unseen Hand, claiming there were secret efforts to reach peace with Germany.

Money made from recruiting meetings and other means enabled him to pay off his debts, and he was elected to Parliament again in 1918 as an Independent for Hackney South. The paper advertised on the Census slip was almost certainly the Sunday Illustrated, renamed in 1921 from the National News,  and due for its first issue to appear in the first week of July.  It would seem that promotion of this paper was at the heart of the advert on the reverse of the change of date slip.

In 1922 Bottomley was tried for fraud and related matters to do with dodgy Victory War Bond Clubs which he had set up a couple of years earlier.

There was a further twist to the concerns expressed by Parliamentarians as to the adverts on the slips.

On 29 June 1921, The Manchester Guardian ran a story under the headline  'The Sabbath and the Census'.  The article noted that although some folk might have objected to census day being on a Sunday, 'no one foresaw the type of conscientious objection that would rouse some citizens of Brynsiencyn [on Anglesey] to hold their hand when the day of registration came and to face a considerable penalty for their Sabbatarian scruples'. The problem was not the census on a Sunday, but the slip of paper accompanying the schedule, notifying the change of dates for recording the census.   This was paid for by an advertisement apparently for a Sunday newspaper.  Including such an advert on a Government document could imply endorsement of the product, perhaps a dangerous precedent. 'The Government ..should take thought before it repeats this kind of experiment in its eager search for revenue.'